Investigating Email: So, What Does a Gmail User Actually Look Like? This article is written by Guy Hanson who is part of the Email Council and the Research Hub.

Email marketers have long been interested in whether the characteristics of their address owners might vary depending on the inbox provider.

Back in 2018, I blogged about why your Hotmail address might be increasing your car insurance, and there were some plausible reasons based on general differences in age, location, and level of technical literacy.

Over the years we’ve also seen articles published showing that:

In January, the Data & Marketing Association (DMA) launched the 2020 edition of its Consumer Email Tracker report. This year – for the first time – respondents were asked which inbox provider they use, and we’ve overlaid this data against other responses to see what they look like, and how they engage with marketing emails.

In this blog, I’ll look at the distinct differences in email address ownership profiles, which show significant variances as factors like gender, age, location and device usage are applied.

In the follow-up, we’ll then consider how these profiles play a real role in shaping the way address owners engage with their emails.

Note: The research was conducted in December 2019 via an online survey of 2,051 respondents who were nationally representative of UK adults. Unless referenced, all data in this article is from this survey. Common domains have been grouped together under their parent companies – Hotmail, Outlook.com, Live.com and MSN are combined under Microsoft, while Yahoo and AOL are grouped under Verizon. The “Other” grouping will be mainly BT Internet, Sky, and Virgin Media users. 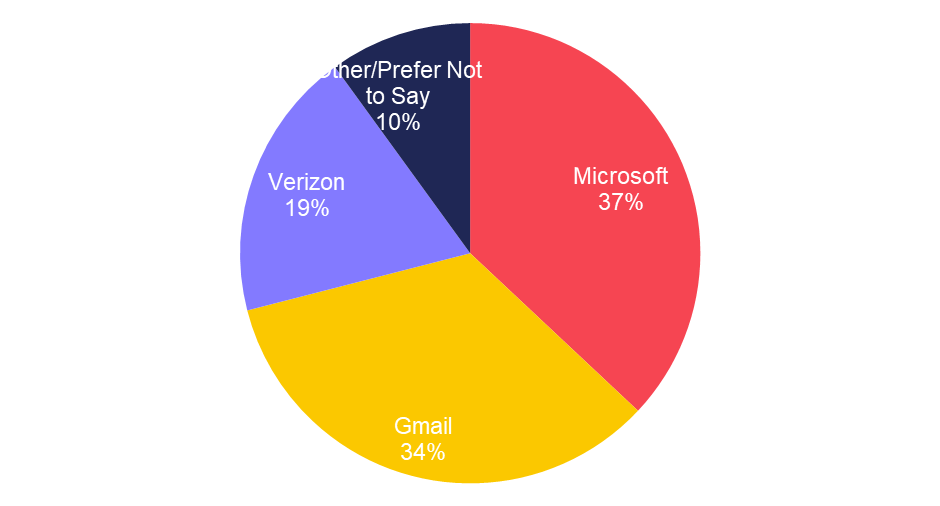 Microsoft coming in ahead of Gmail was unexpected - most ESP benchmark reports have these providers the other way around for the UK, with Gmail generally 10% ahead. A clue lies in the phrasing of the question – respondents were asked which provider they use for their primary address. We can therefore infer they are more likely to use Gmail as their secondary address for receiving marketing emails.

Microsoft has a much stronger female representation, while Verizon and Other have a majority male list compositions.

We fully expected to see Gmail leaning more heavily towards the youngest age group. There is plenty of external research to support this, driven by strong mobile adoption, and with Gmail pre-loaded on all Android devices.

More unexpected was seeing the same trend reflected by Microsoft users, while it was Verizon and Other which show older profiles. There could be a legacy aspect to this, where older users are more likely to still using the popular accounts of yesteryear.

Microsoft and Gmail show a slight bias toward city dwellers, while Other usage is heavily weighted toward rural users. This could highlight the poorer bandwidth in these areas, with consumers using providers like Sky and Virgin to get better line speed performance.

Respondents reported their preferred device usage when it comes to emails: desktop/laptop; mobile/smartphone; tablet; smartwatch; and smart speakers. I grouped the last two together as “New Technology” with the others representing “Established Technology”.

While “New” only represents 3.3% of total respondents, this number is growing rapidly. These results suggest Microsoft and Gmail users are far more likely to be early adopters of new technology like smart phones and speakers, and to engage with their emails using these devices.

So now we know there are indeed real differences between what users of the different inbox providers look like. In turn, they inform distinct behaviours as address owners engage with their emails.

Keep an eye open for my next post, in which I’ll select 5 key questions from the DMA’s Consumer Email Tracker report, and applied the inbox provider overlay to explain what these different behaviours look like.

Part two: So How Do Hotmail Users Actually Behave?