The world of email is evolving. The ability to bring vast amounts of external data either about your business or about your customers in to your ESP is becoming much easier thanks to their greater scale and functionality. The result is the ability to send automated messaging which is more timely and relevant to your user base and leads to much greater engagement with your emails.

With the vast amount of data available to social networks and their ability to process it, it is no surprise to see them taking advantage of this approach to drive traffic back to themselves and increase awareness of their platforms.

Facebook - big on behavioural emails
Facebook is a very heavy user of behaviour to drive users back into the fold. In fact there are over 50 different scenarios through which Facebook can notify you via email of activity inside its network! That is before you allow for the third-party services which also generate notifications.

It is no surprise therefore to see Facebook is currently the third biggest sender of email globally (behind Google’s and Yahoo’s personal email services). There is also no escaping a Facebook email if you are not very active either, with quiet accounts receiving nudges to add new connections to Facebook using their email address book. For those not already using Facebook daily, I suspect these notifications are critical to driving traffic back to Facebook.

Twitter ups the ante with newsletters and notification emails
Twitter on the other hand, has not been a big sender of email historically, but with its acquisition of Summify http://venturebeat.com/2012/01/19/twitter-summify/ back in January, it now sends out a regular newsletter to notify you of interesting tweets from your network. This highlighting of interesting content is difficult to get right as was highlighted byHubspot but with the vast amount of data passing through Twitter today it is a useful way of separating the wheat from the chaff while also keeping users aware of the network and its value.

Twitter also recently invested in a new design approach to its notification emails (see screenshot above). However, these have switched to a generic subject line stating “you have a new follower” resulting in the recipient being forced to open the email to find out who. Previously you were able to see the new follower without opening the email. For me this is a step backward in usability with little benefit to Twitter itself. Surely they aren’t targeting increased open rates?

LinkedIn adds value with its emails
LinkedIn has been the most active historically in using its own connection data to personalise a broad spectrum of their email marketing programme. The emails impart interesting information that you cannot easily see inside the network itself making them worthwhile opening (see here for more on one of their emails).

In a similar way, the new LinkedIn Today newsletter (similar to Twitter Stories), highlights the content shared inside the LinkedIn network which it believes is relevant to you. 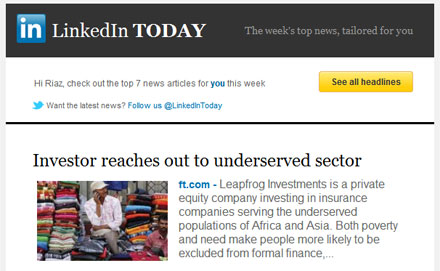 All three networks are still clearly investing in their email programmes. That in itself suggests the programmes are continuing to perform well. There is a difference in priority though for Facebook compared to the other networks with the former focused solely on driving people back into their network, while Twitter and LinkedIn’s programmes go further – focusing on content discovery which, when done well, adds real value to those using the network, indirectly generating further usage of the social network. I suspect we will see more from Facebook in this area eventually. What the DCMS consultation means for marketing, privacy and electronic communications.

For marketing and data professionals, the latest government consultation on data protection in the UK has thrown up a number of new considerations that should be thought about when planning marketing strategies for 2022. Three million people in the UK are colour blind and can’t see your green button on your grey background. Find out how you can create accessible marketing campaigns with email alongside the DMA Email Council. Email has risen to become the most frequently used channel for one-to-one contact with consumers. The versatility and flexibility of email means that marketers' use of the channel are only limited by their imagination.

Six useful tips from our email experts to get ready for this holiday season!