Is low pay a thing of the past? 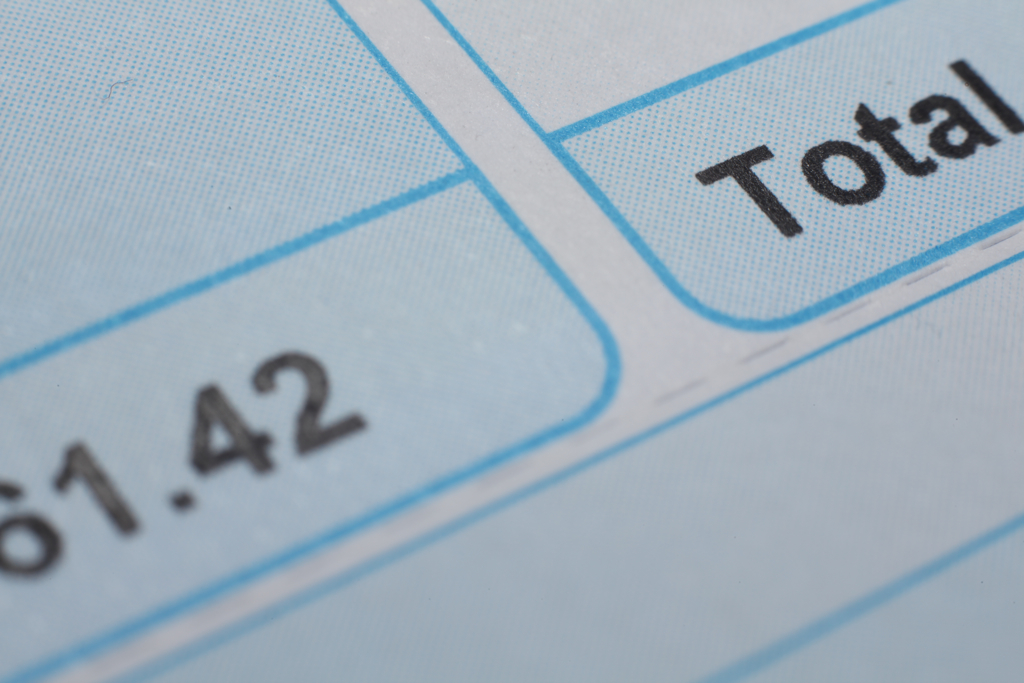 According to the latest data the proportion of UK jobs classed as ‘low paid’ has shrunk to 16.2%, the lowest proportion since 1997.

What’s behind this trend? And how can we continue to reduce wage inequality?

What is low pay?

Low pay is defined by the Organisation for Economic Co-operation and Development as pay less than two-thirds of median hourly earnings.

According to the Office for National Statistics in 2019 median hourly earnings for all jobs is £13.27. That means jobs paying below £8.85 an hour are considered low paid.

Low paid jobs are on the way out 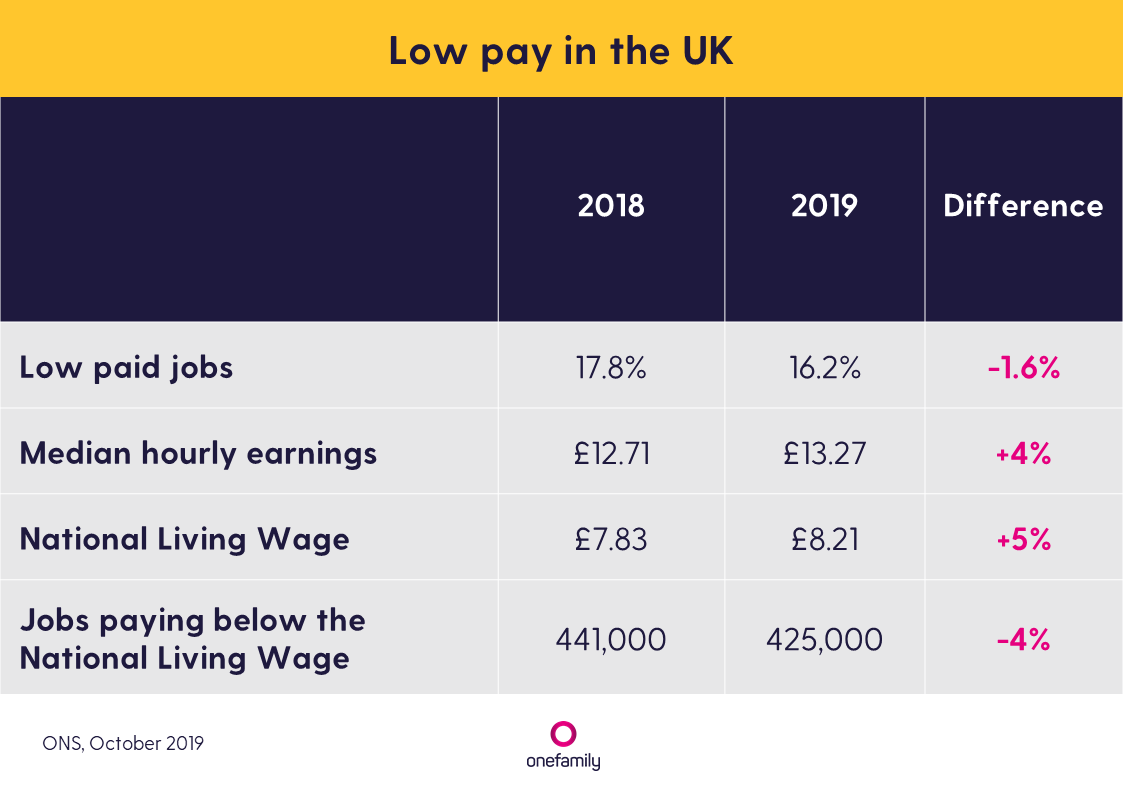 The decrease was most marked in London and Scotland, where the proportion of low paid jobs more than halved between 2000 and 2019. 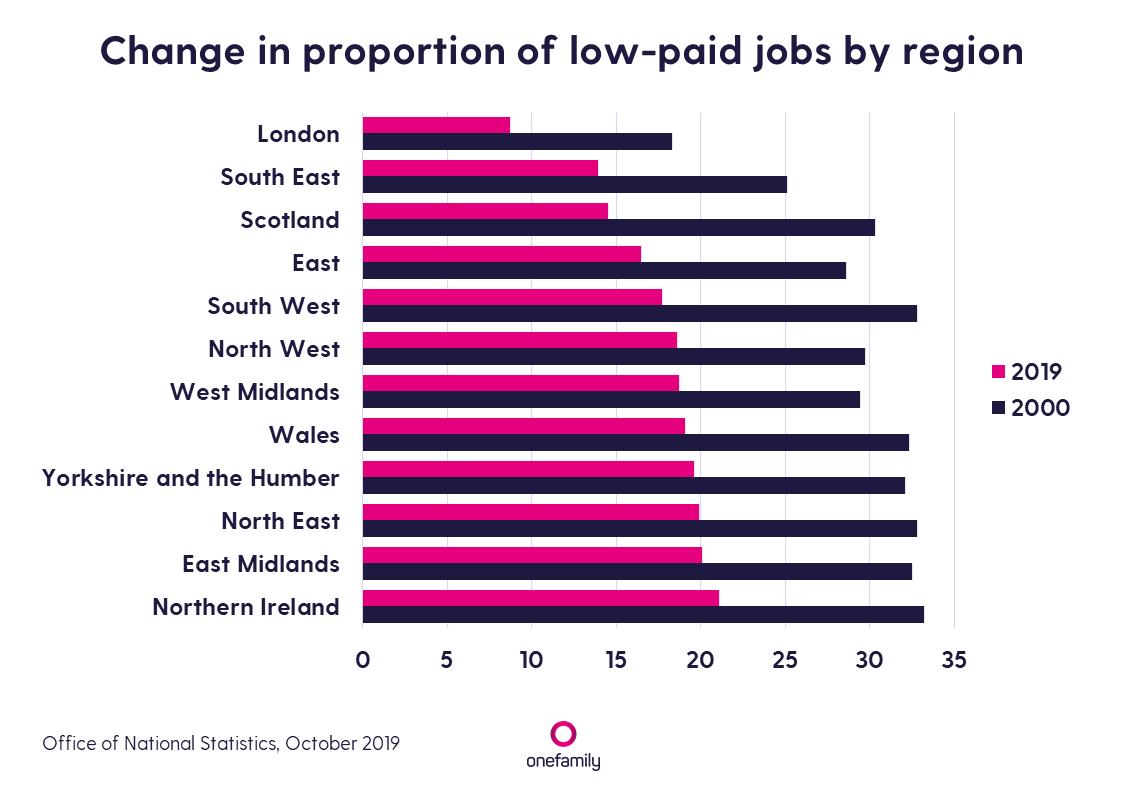 Why is this happening?

That’s not to mention the number of businesses who are voluntarily pledging to pay the Real Living Wage, which is £9 per hour, as defined by the Living Wage Foundation. The real Living Wage is based on the real cost of living, rather than arbitrary targets or political point-scoring.

There are now more than five thousand Living Wage Employers in the UK, including more than a third of the FTSE 100 and household names like Ikea, Aviva and Nationwide. 570 of them are in Brighton and Hove including Brandwatch, Brighton & Hove Albion and OneFamily.

While we wait to see how the latest Living Wage rise impacts the proportion of the UK considered as ‘low paid’, how can we keep this trend continuing into 2020 and beyond?

With a general election looming, what do our political parties say about low pay?

Labour’s strap line “for the many, not the few” promises a fairer deal for all workers.

Labour have pledged to instate a £10 an hour National Living Wage if they get elected, and for it to extend to those under the age of 18, who currently enjoy a minimum wage less than half that (£4.35 per hour).

In their manifesto they also claim they will:

You can find out more about Labour’s pledges on labour.org.uk.

Whether this project means, as Chancellor of the Exchequer Savid Javid claimed, that the Conservatives are the “workers’ party” remains to be seen.

Find out more about the Conservatives’ National Living Wage commitments and election manifesto on conservatives.com.

The Liberal Democrats are leading with a ‘we must stop Brexit’ manifesto, but what have they got to say about low pay?

In their manifesto they commit to:

Find out more about the Liberal Democrats’ manifesto at libdems.org.uk.

The Green Party have also made significant pledges relating to low pay. They want to:

Find out more about the Green Party manifesto at greenparty.org.uk.

They don’t have much to say about low pay or creating a fairer deal for workers. Who would have guessed!