In the closing presentation of DP2017, serial entrepreneur and ambassador for open data Gavin Starks made an impassioned plea for open data.

Culture is always left to the end in technology revolutions. Make no mistake, the web of data is a revolution: but it has very little to do with new technology. Learn about the cultural impacts and business models that will help you navigate in a data-driven world, he says.

He is currently working with Sir Tim Berners-Lee, Prof. Nigel Shadbolt and others to work out the next phase of the web.

"Open by design has been a feature of the businesses I have been involved with. Data is not the new oil. It increases in value the more it is connected," he says.

He says that for businesses to benefit from the data explosion, "How to increase the connectivity will drive a lot of business value. This is the data landscape.

"Data is changing the nature of politics, of design. This is a cultural shift to an open network society. Bringing with it questions about social contract, the state and the companies we engage with. This needs investment. Without trust we will not be able to unlock the kinds of innovation we would like."

He paints a picture of a 'data spectrum' from 'closed' through 'shared' to 'open'. 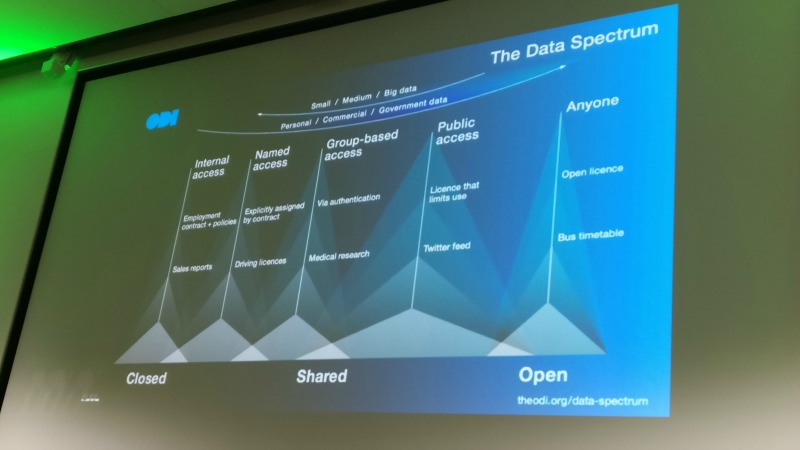 This spectrum defines the licensing conditions over how you can use your data, he says.

"Personal information could be closed and then shared. It could be leaking from your device. There are no fixed boundaries between these three states."

These states pose a problem when considered in the rapidly-expanding data web.

"How do you wire up different data? There will be 25 billion machines online by 2020. Like Bruce Schneier says, everything is now a computer."

To show how much the digital economy has transformed the world, he says it, "Uses 10% of global electricity, same amount as used to light the entire planet in 1985.

"How to sustain 7 billion people while hitting peak ‘everything’ everywhere?"

"The level of transparency data will bring to our organisations will transform our relationships with customers and citizens," he says.

He talks about threats to quality of life, to data security and so on, and says these threats are also increasing.

"The pace of change in increasing. How do you engage with a customer when you don’t know where they will be in a year?" He gives the example of Signal, said to be rapidly replacing SMS and other messaging apps like WhatsApp. "18 million have to signal since the US elections.

"Open is the only way to own the ecosystem and get a competitive advantage", he says.

"The pace of change is unprecedented. We now have 2.7 billion views of Gangham Style. We also have 23m views of Amy Cuddy’s Ted Talk:

He says the Open banking standard was developed to drive both innovation and compliance and give customers back control of their data.

Can be brought together to drive benefits for banks, consumers and open markets.

He ends with the following: