How Ikea went from hero to zero in a week

Last week we saw a stroke of creative genius from BBH with the Ikea ‘Bookbook’ ad for the launch of their 2015 catalogue. In a parody of an Apple launch the ad takes us through the various functions of the catalogue, such as pre-loaded pages, easy sharing, and tactile technology. The ad soon went viral and had us all sharing, tweeting and laughing… and no doubt planning our next fateful trip to Ikea.

Fast-forward five days and I receive a direct mail postcard from Ikea for its ‘IDEAS Festival’ campaign. The postcard caught my eye as it was attractively designed and timely given last week’s ad and, even better, there was an offer of £15 off if I spent over £100. However, when I took a closer look I soon realised the discount offer was only for the Manchester store, something completely irrelevant to me as I live in London – which Ikea know as I belong to the loyalty scheme and of course, they have my address.

I wondered if this offer was available in other stores so decided to scan the QR code, which was prominently displayed, but alas, the code seems to be for store use and not the consumer, shame they failed to state this anywhere. 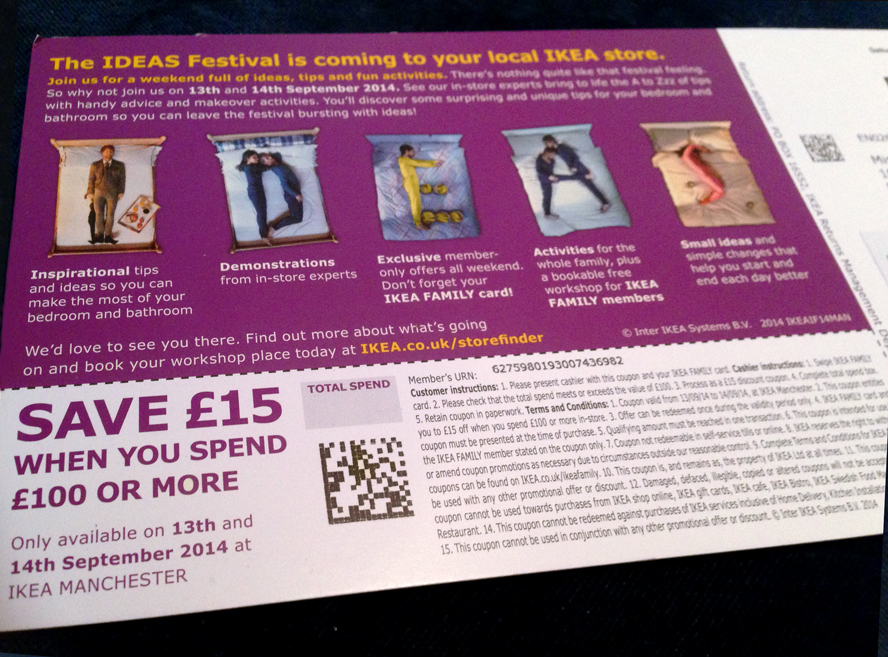 To add insult to injury a few hours later I received an email for the same campaign. Again, it was a very attractive email and this time they got my local store right, but alas the discount offer differed from Manchester and was for £10 off, leaving me with a distinctly sour taste and reasonably frustrated. 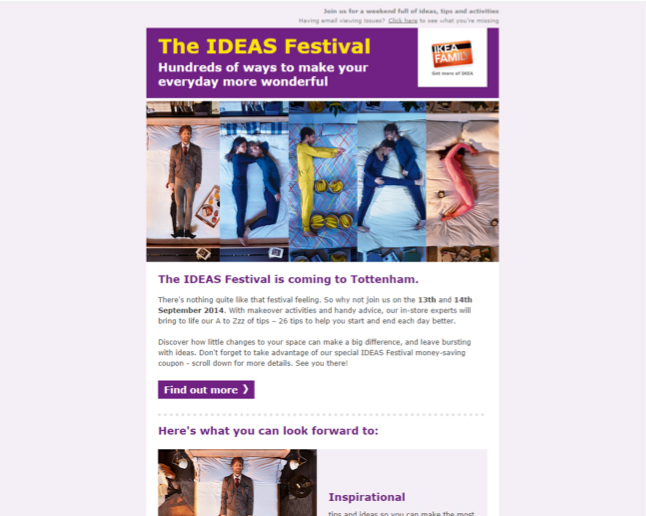 I can’t profess to be an expert but with my consumer hat firmly on what can I say about this campaign? Well the plus points have to be the creativity and timeliness of the campaign. Ikea already had me at hello following the fantastic buzz around last week’s ad – the brand was at the forefront of my mind and almost a week later I was still talking about it. The direct mail piece was beautifully designed and powerfully landed the same day as the email with a great offer.

But the negatives have to be the QR code – really are we still sticking QR codes on print with no explanation or use to the consumer? And the hiccup with the relevancy of the store, revealing the difference in offer… well that just made me downright sad. Too many brands just throw on a QR code and think that this is making the piece more 'digital' or 'integrated'. The full customer journey needs to be considered and brands should take this chance to continue a story online that is relevant, interesting and maybe even fun!

As data and marketing leaders, we should be constantly striving to better understand marketing effectiveness and the measurement of this value. This was the focus of a recent roundtable hosted by the DMA and Salesforce. Read on to find out what marketers should do to improve measurement today and tomorrow. DMA Insight: Challenges and Successes Through the Lens of 2021

Once objectives are set and everyone is on board, what can stop email marketers’ success? Read on for a taste of the challenges marketers faced and overcame throughout 2020, as well as what this year meant for brands and consumers. Apple's Mail Privacy Protection: What Does it Mean for Marketers?

Open rate’s usage, ESPs’ insights, brands’ insights, ISPs’ developments – what’s changing? What is impacting the accuracy of these metrics? Read on to find out