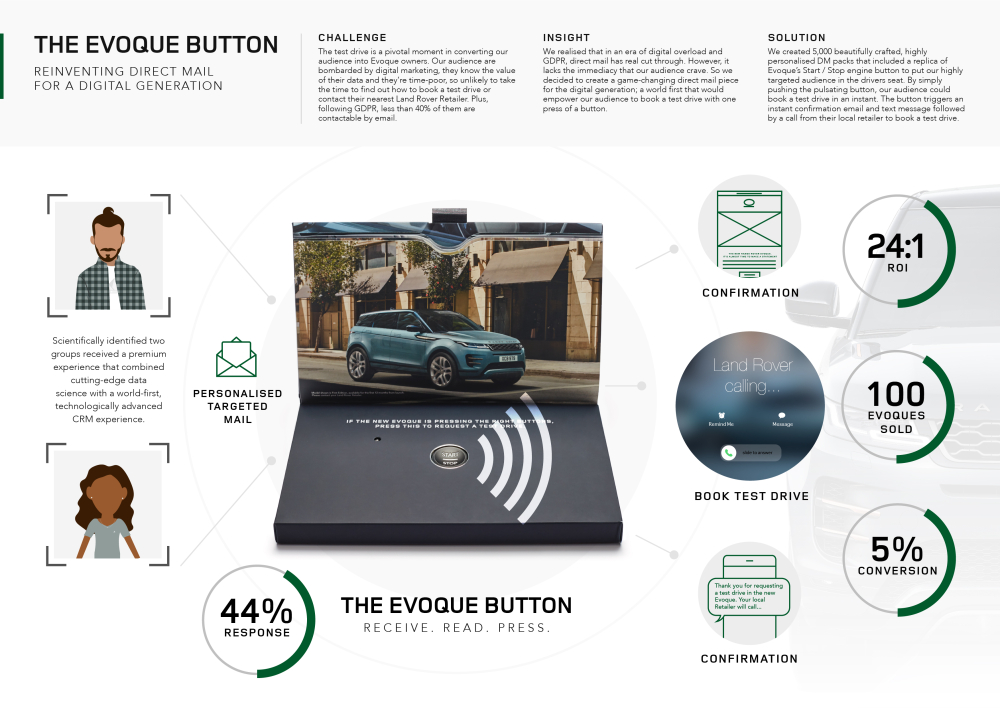 JLR was on a mission: to get tech-savvy but time-poor people behind the wheel of the new Range Rover Evoque.

Edit decided to re-imagine the test-drive booking process, making it as simple as pushing a button.

Two groups were identified: first, via machine learning, previous owners likely to upgrade in the 10 months following the campaign.

Second, Land Rover owners who might also like an Evoque, found by putting five years of data into a custom predictive model.

An audience that could buy the new Evoque was available.

But a connection had to be made with them.

It was a young, affluent, tech-savvy group that values design and premium brands.

However, they are time poor and unlikely to opt-in to email.

Direct mail would provide cut-through - but it had to be radical and technologically advanced enough to engage them.

Edit created a game-changing mail solution for the digital generation.

It used pioneering technology to enable a mail recipient to book a test-drive with a single button push.

A luxurious direct mailpack revealed the car's alluring design and features via seductive images and copy, ending with a replica of the Evoque's stop-start button.

All this happened in real-time in a GDPR-compliant manner that required no customer sign-up, pre-interaction or Bluetooth, tethering, or Wi-Fi connection.

Media ran across 36 publications, 32 websites and high-impact out of home media.

Of those 2,000-plus test drive requests, 5% purchased a new Evoque.