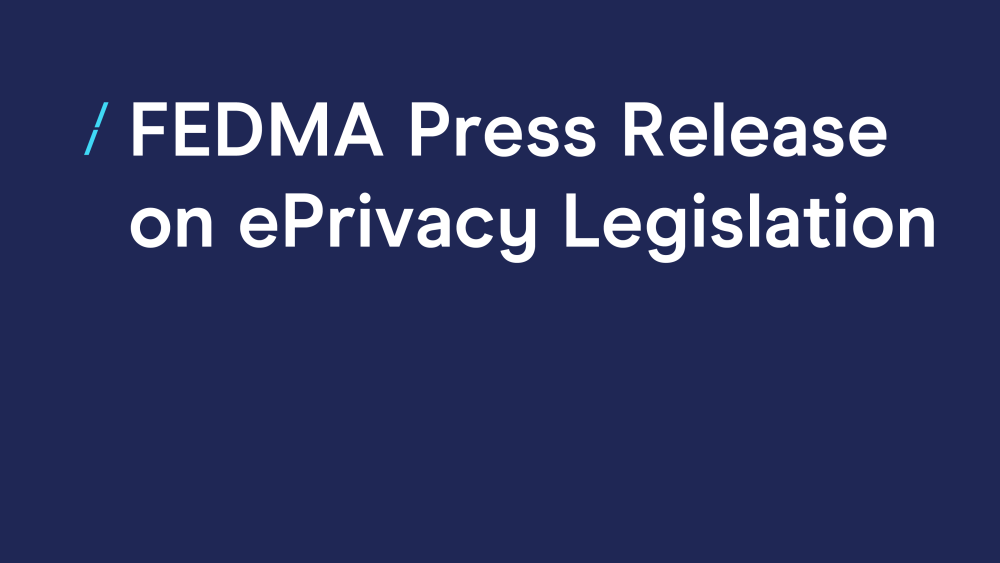 Following Thursday's ePrivacy agreement within the EU Council, the legislation moves to the next stage of negotiations between the EU Council, Commission and Parliament. The DMA's European sister body, FEDMA, has issued a press release on the next steps.

FEDMA Press Release on ​trialogue negotiations over ePrivacy Regulation can deliver greater coherence with the GDPR and upcoming EU rules in the Digital Single Market:

On February 10th, the Council of the European Union confirmed the mandate for negotiations on the ePrivacy Regulation. Following almost four years and eight EU presidencies, EU Member States’ compromise has tried to set the balance between solid protection of the private life of individuals and fostering the development of new technologies and innovation. The agreement thus represents a closer step towards the establishment of common and updated rules for both end-users and businesses.

Yet, last-minute changes to the text and the abstention of some countries in the final vote illustrate that strong divisions among EU countries still persist. As such, the compromised version of the draft proposal includes many restrictive provisions, which could crucially impact the direct marketing industry, as well as advertising, media, digital services and future innovation. In particular, excessive legal constraints will be directly felt by European SMEs which are already struggling due to the pandemic while trying to survive in the increasingly data-driven marketplace.

In this context, FEDMA believes that the purpose of the ePrivacy Regulation and the opportunity it represents must be kept in mind throughout the upcoming trialogues. More coherence and synergies with the GDPR’s strong safeguards and risk-based approach, as well as with other legislative initiatives currently in the EU pipeline, including the Digital Services Act and the Digital Markets Act, are therefore fundamental in order to make the 2020s Europe’s Digital Decade, as envisaged by Commission President Ursula von der Leyen.

With this in mind, FEDMA is looking forward to continuing contributing to the discussion with both the European Parliament and the Council of the EU.

A note from UK DMA:

This is the first piece of EU Data Protection legislation that will be implemented after Brexit. While the UK supports an adequacy decision and continued close ties with Europe, the UK does not have to adopt the ePrivacy legislation.

The DMA will examine the final text when it appears but, from initial scoping, the DMA is of the opinion that this is not a necessary piece of legislation and that the UK GDPR (UK Data Protection Act) is a robust framework for the data protection sphere going forward.

The UK may wish to revisit other legislation like PECR to ensure it is reflective of the current legal and regulatory layout.