Craft in the Age of Coronavirus - Sound Advice 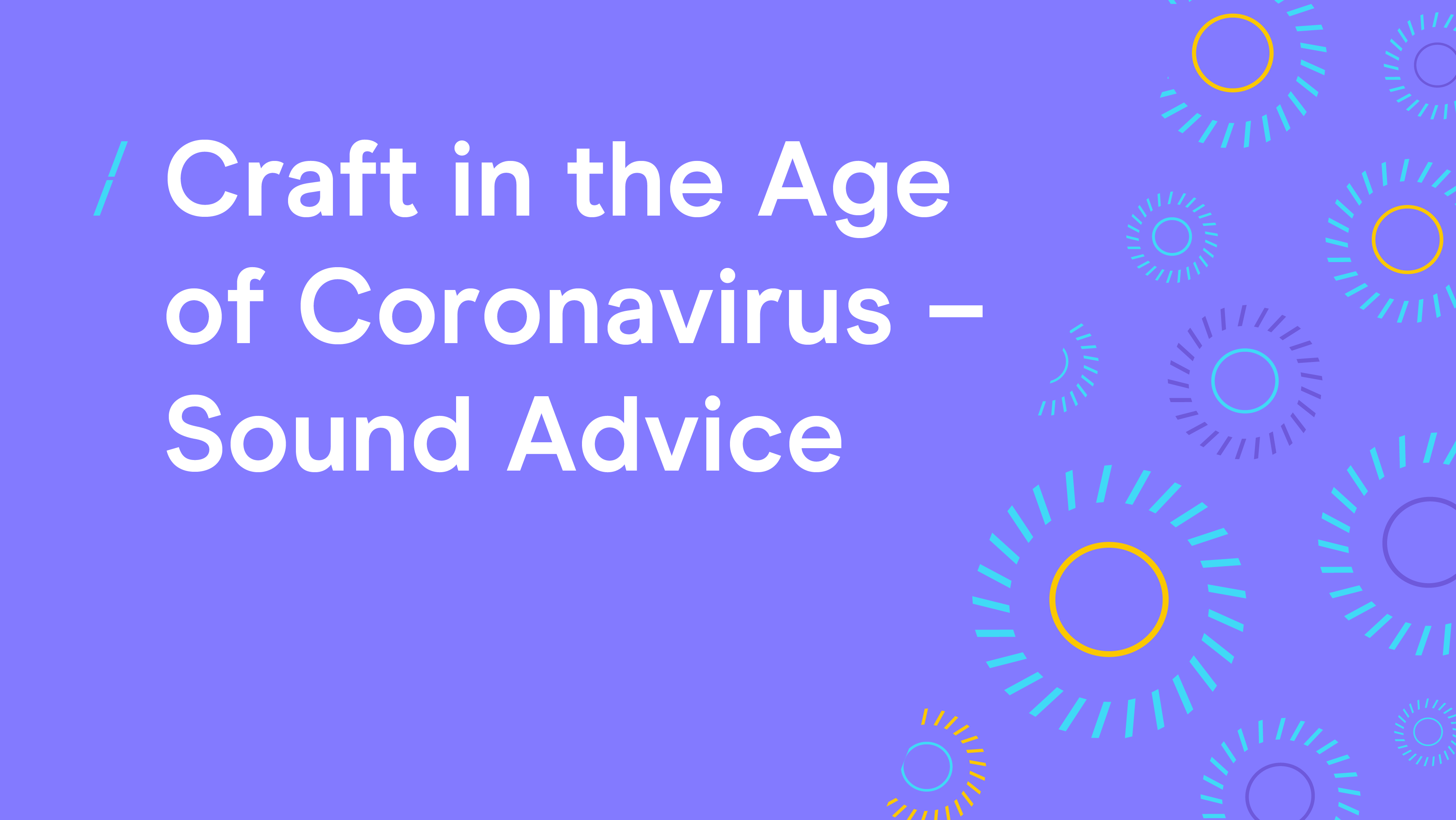 Our new series, Craft in the Age of Coronavirus, shines a light on creatives educating, entertaining, and encouraging us throughout the pandemic, keeping us informed – and inspired. A huge thank you to our talented contributors for sharing the process behind their much-needed work.

Here's our first long-read article in the series:

Sound Advice is the perfect – and in the age of the pandemic, unconventional – marriage of copy and graphic execution from Simon Morgan, Founder of Bread & Butter, and Copywriter Ben Fitton. From Louis Armstrong to Lady Gaga, manipulated lyrics meet a positive, impactful design, helping to spread the message of the importance of staying at home and social distancing.

For many agencies and freelancers, work has fallen off a cliff over the last couple of months, leaving them with a number of decisions. One of those decisions for Morgan was how to put time he normally doesn’t have to good use. Then a friend shared a brief from the United Nations that called out to creators to help stop the spread of the coronavirus.

This was before the UN received an outpour of responses and reached out to Talent House, who designed their COVID-19 Creative Content Hub, a library of artwork that educates, uplifts, and inspires individuals and communities around the world throughout this global crisis.

Imagine all the people living life at home

By and large, most people are listening to the lockdown measures, Morgan said. But a small minority perhaps still aren’t getting the message, not just in the UK, but all over Europe and the rest of the world. “My starting point was, okay, so here’s this great opportunity to collaborate with some of the creatives that I work with on an ongoing basis – what can we do?” That’s when Morgan teamed up with Fitton to work on Sound Advice.

You’ve gotta be brave to be bold, in the right measure

To start, Fitton doesn’t listen to a lot of modern-day pop music, so finding the songs before even crafting the copy turned out to be one of the biggest challenges. He spent around three days researching, choosing an eclectic range of lyrics that weren’t just universally known, but lent themselves to being manipulated – in only a few words – to make sense for the coronavirus.

Morgan, who created the positive, impactful design, said “a lot of what I’ve already seen from other creatives responding to briefs for the coronavirus seemed to follow a formulaic use of blues, referencing the NHS, maybe a little bit more of a grown-up colour palette and type-face choices.” That’s all great, Morgan said, but he and Fitton wanted to create something that has cut through and stands out and, if you want to do that, you need to do something a little bit different.

Most importantly, they needed to tread the delicate line between having a bit of fun and not making light of a very serious situation. Morgan and Fitton’s advice for others looking to do something similar is to let their instincts steer them in the right direction.

As long as the work is well intentioned and there’s a fundamental reason for doing it, Morgan said, I think you’re absolutely fine. Fitton compared achieving this balance to the rules of comedy: you never punch down. If you tend towards a positive call to action at the end, he said, you’ve got quite a free reign with the creative process that goes before it.

Let's band together and feel alright

When asked why they chose lyrics, as opposed to quotes from films or books, both agreed that while this could definitely work across a lot of different mediums, music is more accessible; it transcends so many different barriers. “I don’t listen to Lady Gaga,” Morgan said, “but I know that song.” If the first song doesn’t click, Fitton explained, you can quickly swipe across, and still get the idea.

Trying to find a film that would touch so many people through a certain time period, they said, would have been more challenging. “You see a movie once or twice if you really like it, but with a song, whether you like it or not, if it’s in the mainstream arms, you hear it when you go into shops or if it’s playing on the radio,” Morgan said. “It’s in your head.”

The same is true for older songs: the Rolling Stones are likely to resonate with different age groups, because their music has been covered many times, he said. Lots of people will recognise the lyrics, though they might not know the song is a Stones original.

The starting point was to find something that resonates inside and outside the UK, not only to reach as many people as possible, but also to inspire them to share the project or recreate their own, and help spread the message. Music was the perfect choice. Morgan has even provided a link to contact him for access to the illustrator files on www.breadandbutter.cc/sound-advice, for those who would like to use the design, fonts, and colours from Sound Advice to recreate their own project.

Morgan and Fitton agree on many things, one of them being collaboration will get you further, faster than working on your own, and not just during the lockdown.

“Use your connections if you have them,” Fitton encouraged. “The more you can make it a team effort, the better the final result will be.” Before your project hits the wider public, he said, share it with as many people as you can who you trust. Fitton suggests rather than asking someone what they think or if they like the work, ask them, do you think there’s anything wrong it?

You see things from a different perspective, Morgan explained, so you’re able to bounce back and forth ideas and feedback. And if you’ve got a good relationship, you can say, actually that doesn’t really work that well, without the other person getting down. “A lot of creatives tend to have quite thin skin and don’t like being critiqued too much,” he said, “so it’s nice to work with people that don’t take it personally and just think, I’ll have another go.”

One of the unique ways that collaboration has changed during this time, is it can extend to people who don’t even know you exist – like some of the world’s most iconic musicians. When asked about the introduction to Sound Advice:

Sorry guys, we had to change the lyrics – please don’t sue us

Morgan said, “One of the fortuitous things with this project is it’s very rare when you can actually use somebody else’s name or lyrics or anything else without risking exactly that. Whereas with this, because it’s for such a good cause, who’s actually going to really mind?”

“It’s not about taking advantage of a situation, obviously,” Fitton said. “It’s using certain things to your advantage in order to get a positive message across.”

Top of the Pops

Though their favourite songs change daily, here’s their top three tracks (at least for today).

Check out Sound Advice on Instagram or at www.breadandbutter.cc/sound-advice.

Explore the DMA’s fight for the power of the word, and beyond. Learn more about our mission to prove the value of creativity in UK business, Government, and society through our campaign for Great British Creativity.