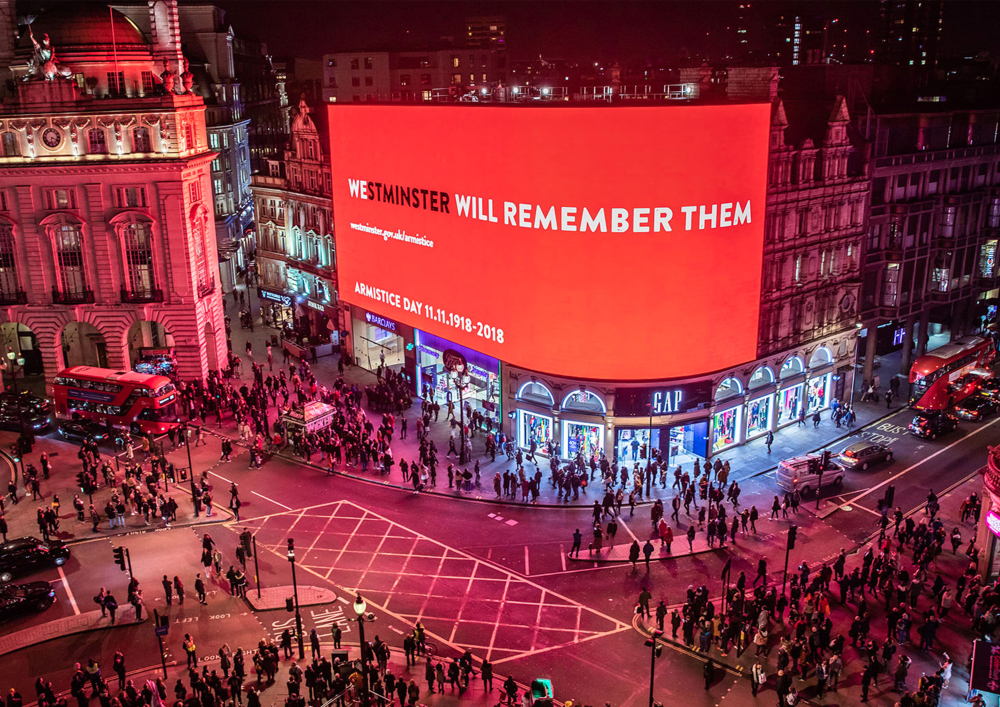 For the 2018 centenary, Westminster Council wanted to create an occasion that would resonate in London and beyond.

Some even see it as a celebration of war.

The centenary was an opportunity to restore meaning and create empathy.

100 years after the end of the First World War, which claimed the lives of one million British servicepeople, TMW’s experience highlighted the human cost of the war.

Collective spirit was the key concept.

In November 1918, when news of the Armistice broke, Londoners spontaneously gathered in Piccadilly Circus, so this became the activity’s focal point.

In a world first, TMW took over Piccadilly’s iconic digital ad screens for an hour, persuading passers-by to reappraise the Armistice.

The idea was driven by a startling realisation: that it would take 10 days, 19 hours and four minutes for all of the British and Commonwealth soldiers who died in the First World War to march past in single file.

It became the metronomic heart of the activity - behind every pair of boots was a real story.

At evening rush hour on November 9, the screens were filled with relentless marching boots - each pair representing a soldier who died.

Design was crucial, with Piccadilly bathed in a stark red background. The normally silent screens were fitted with a complex sound system so the marching boots echoed.

As the last pair marched off screen it faded to black.

A two-minute silence was followed by a lone bugler sounding the Last Post.

Crowds of people paused to watch the screens and there was an outpouring of emotion on social media.

There was a combined reach of nearly 400 million and radio added another 27.9 million.

The reaction of passers-by and guests, including representatives of the military and veterans, was deeply moving.