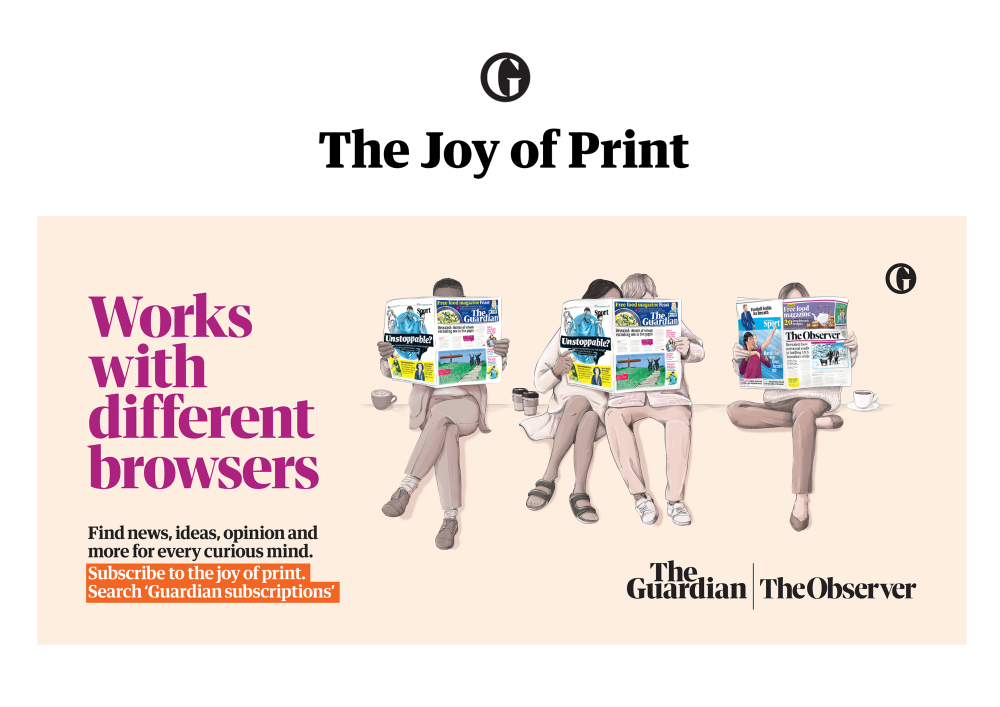 Campaign Name: The Joy of Print

The Guardian sought to boost print subscriptions - an area of publishing that has been in steady decline for years.

How could it combat the rise of digital?

Innovative thinking was required to buck the trend towards digital readership.

OLIVER identified the sweetspot of print coverage that appeals to Guardian readers: nostalgia for Baby Boomers, novelty for Millennials - without sacrificing one for the other.

Media was key. Channel-specific iterations of the creative ran across upwards of 16 owned, earned and paid channels to ensure a joined-up approach that reached four main audience groups: lapsed and cancelled subscribers, engaged users, disengaged users and people who had registered interest.

Tagging at a granular level, particularly digital media, provided insights into how the creative worked for each audience.

Working mainly across print, the campaign idea seamlessly combined modern with old and taking a cheeky pop at digital publications.

“Works with different browsers” showed how different readers could each find something in one newspaper.

The Joy of Print was brought to life by illustrator Amber Day's charming visualisations - including a nostalgic nod to the illustrative style of the famous 1970s book of a similar name.

The campaign was the most successful subscription driver in The Guardian's history.

It resulted in over 8,000 new print subscribers in the first month.

And, despite a price rise during the campaign period, news-stand sales increased to 13,000+ copies above target per week.