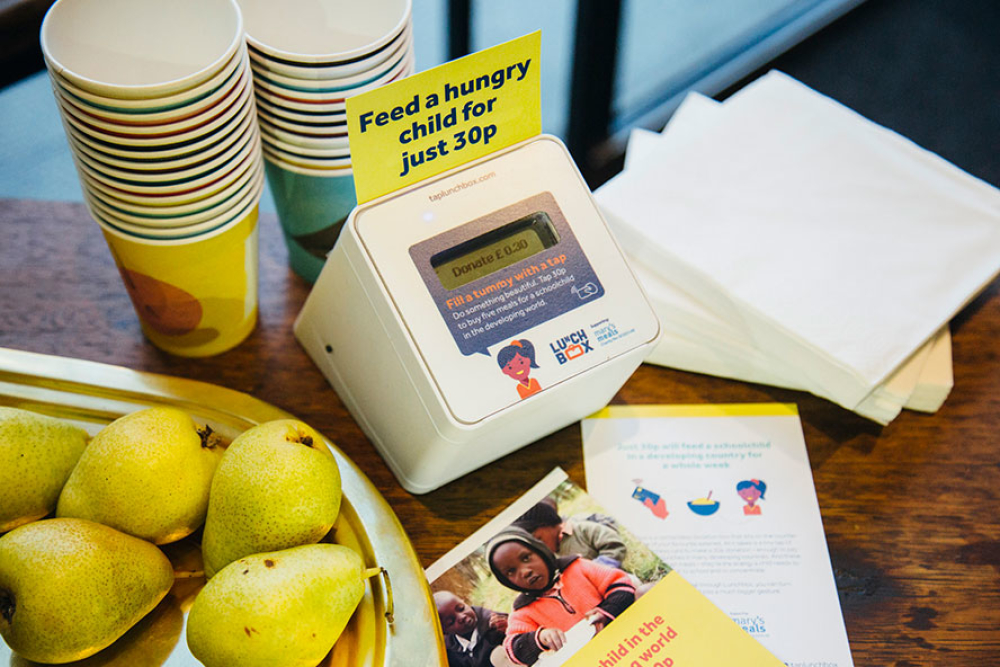 Traditional fundraising methods are under scrutiny for placing people under unacceptable pressure.

The idea was to help charities raise money while making donors feel nothing but good. Lunchbox marries contactless technology with behavioural science. This wasn’t a client brief, but an agency idea shared with a charity partner.

By taking a tiny, fixed amount with a tap of your card in the right context, Lunchbox replaces guilt and pressure with instant feelgood giving.

A 2014 Cabinet Office report set out four insights for successful fundraising, and Lunchbox is designed around them:

1. Make it easy: Lunchbox takes a set microdonation when lunch is bought with one extra tap of a card.

2. Attract attention: bright, simple graphics when someone pays for lunch.

3. Make it a social norm: by keeping donations small, making it easy and instantly gratifying, there is the hope of building habitual giving.

4. The right timing and context: what better time to buy lunch for five children overseas than when you buy your own?

Crucially, a donation is a private and pressure-free decision. It’s unprompted except for the message on the Lunchbox unit: no guilt, just tap and share.

People are turned off by hyperbole about hunger and deprivation - it makes them feel manipulated.

This campaign stayed positive, focusing on the power of a tiny gesture. The 30p fixed donation translated into a number of lunches - five per tap.

The units were small, so the graphics and messages were clear and direct. The line ‘Fill a tummy with a tap’ summed up the function of the Lunchbox unit with simple charm.

In supporting literature and online, the campaign explored in more detail the difference each donation makes. No sad stories, just information about the work of the charity, Mary’s Meals, who provides lunches to schoolkids in developing countries so they have the energy to learn.

The line ‘Tiny Taps Can Change the World’ underpins the idea as it rolls out beyond lunches into other contexts.

With a tiny promotional budget of £500, the initial three-month trial in five lunch venues raised enough to buy 13,000 school meals.

The units have remained in place, generating a further 2,000 lunches over the quiet summer period.

There are currently conversations taking place with two ethically-minded food chains in London to expand further and support many more lunches.

Both the agency and Mary’s Meals benefited from wide PR coverage, with 31 articles written about the initiative by publications including in The Drum, E-Consultancy, Charity Times and Springwise.