Heaven or Hell's Kitchen: Insights from a Freelance Creative Director on Lockdown Inspiration 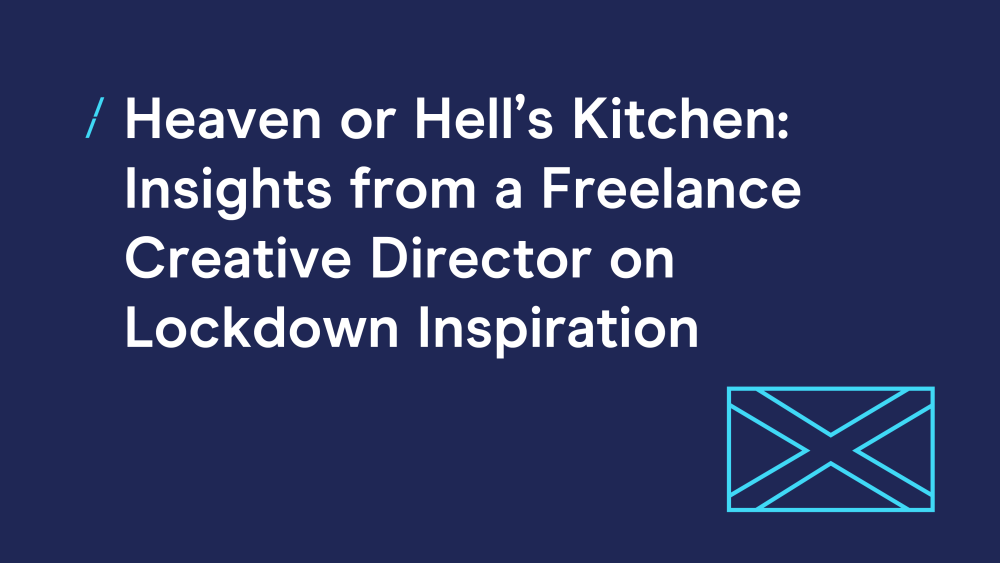 Have the beeps and buzzes of kitchen appliances always been normal for remote freelancers, and how do creatives dive into their imaginations in such environments? Read the article below by Ian Fletcher, Freelance Creative Director, on how his former fast-paced agency world compares to his new work space – his kitchen – plus how he’s used it as an opportunity to reset:

The rumble of the tumble-dryer, the washing machine spinning again, and then there’s
that bloody dripping tap that I know I’m going to have to fix at some point. It’s hardly the most creative environment, but it’s mine.

I’ll be honest, I’m not a fan of writing articles, and I’m still trying to work out what this one is all about. But, I’m at home in the kitchen and I can do it on my time. I’ll put the kettle on and while waiting perhaps get an idea.

I don’t feel like an authority on creative. I’ve done it awhile, worked on a few exciting projects at interesting places with smart people. I have a point of view and maybe some experience that could help others. Maybe.

In the ‘normal agency world,’ I’d be bouncing around at 100mph, reviewing work, meeting clients,
reviewing more work, diffusing some minor issues, signing off holidays, and sorting my timesheets that I’ve not done for three weeks. I’d get home late, wake up early, drive in through rubbish traffic for an hour, and start again.

I became a freelance creative at the beginning of March (great timing I know). I’ve watched Contagion, but I never thought I’d be living it. I don’t actually know what freelance normal is. Maybe a 15-second commute to the kitchen, Radio 6, endless coffees, Zoom, and the beeps and buzzes of kitchen appliances are normal.

For months, we’ve all been living similar lives: wash your hands, wear a mask, clap, bang a pan, follow the arrows, wash your hands again, stay behind the line, watch everything on Netflix, take a Disney+ trial, do a quiz, watch Amazon Prime, and then see if anything new is on Netflix again.

Everything has been the same in a world where we try so hard to be so different.

Where do I look for an idea? Where will it come from? Will the idea pixies pop a gem into my head, or shall I just keep typing this and hope it all comes together?

Nobody becomes a creative to sit at a computer until 5.30pm then shut down. We do it to solve problems, take on challenges, get results, and work with other smart, talented people. That isn’t going to stop because we’re sitting at a dining table.

WFH for me is heaven at the moment. It’s an opportunity to reset, rebalance. It’s time for us all to take a breath. For creatives to regroup, look up, look out, and get inspired. Lockdown came, but the idea pixies never really left.

Embrace those heavenly beeps, rumbles, drips, ding-dongs, and get all of that washing done.

I’m just going to make a cuppa, then I’ll write this properly: I’ve got an idea.